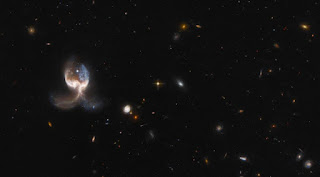 An angel gets its wings as two distant galaxies collide in a stunning new image snapped by the Hubble Space Telescope.

The galactic smashup took place in the VV689 system in the constellation Leo. The delicate wings formed as the two gravitationally bound objects collided and merged, deforming each other.

"The galactic interaction has left the VV689 system almost completely symmetrical, giving the impression of a vast set of galactic wings," officials with the European Space Agency (ESA) said in a statement.

While the two galaxies in the VV689 system are truly colliding, other images can be deceiving

"Unlike chance alignments of galaxies which only appear to overlap as seen from our vantage point on Earth, the two galaxies in VV689 are in the midst of a collision," ESA officials said in the statement.

For example, in 2012, Hubble captured an image of what looked like two overlapping galaxies, called NGC 3314, seemingly in the midst of a collision. In that case, however, it was merely a trick of perspective, according to ESA. 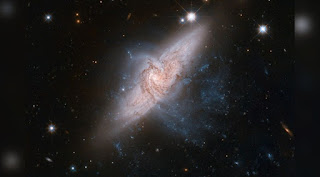 Many galaxy collisions are inevitable and were set in motion billions of years ago. By monitoring how galaxies move relative to each other, scientists can predict if and when galaxies will collide, according to NASA. For example, astronomers have predicted that in around 5 billion years, the Milky Way will inevitably crash into our neighboring galaxy, Andromeda, Live Science previously reported.

The image of VV689 was discovered by the Galaxy Zoo citizen science project, in which hundreds of thousands of volunteers sift through an enormous trove of data collected by different telescopes, including Hubble, according to ESA.

After wading through images of galaxies, the public voted on a selection of noteworthy examples and submitted them for "detailed follow-up observations with Hubble's Advanced Camera for Surveys," according to ESA. Some of the submitted examples included ring-shaped galaxies, galaxy spirals and a selection of galactic mergers, including VV689.