World's longest car is found, restored, and made even longer 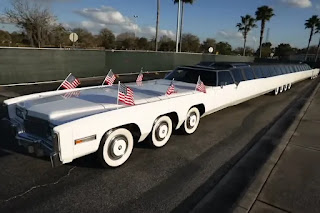 The American Dream: the longest car in the world, at over 100 feet
Guinness Book of Records
We will never complain about finding a parking spot again. The "American Dream," now stretches to more than 100 ft (30.5 m), seats more than 75 people, and has its own pool, diving board, jacuzzi, bathtub and mini-golf course. Oh, and a helipad.
It was originally built in California circa 1986 by custom wizard Jay Ohrberg, out of a series of Cadillac Eldorado limos although he wimped out at just 60 feet (18.3 m) with 26 wheels, a V8 engine in the front and another V8 in the back. Quickly understanding the error of his ways, Ohrberg later extended it to 100 ft, putting a hinge in the middle to give it a chance to get around a corner.
Strangely enough, it didn't prove very practical as a daily getabout, and after a few movie appearances the Dream was left to languish and rust out the back of a New Jersey warehouse for many years. The colossal project of restoring it was too much for the fellow that found it, and he eventually sold it to its current owner, Michael Dezer, in 2019. 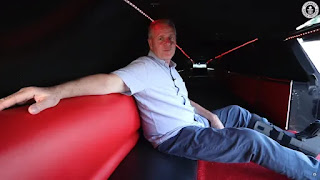 Dezer owns the Dezerland Park Car Museum and Tourist Attraction in Orlando, Florida, so he had the expertise to get the Dream rebuilt, as well as an immediate use case for it and the "well over US$250,000" it cost to rebuild it, a project that took more than three years. The cabin, for example, was completely trashed, so Dezer cut it out and replaced it with a cabin from another donor car, as well as replacing the entire drive train.

In the process, he made sure to add an inch and a half to its length, allowing it to re-take its own Guinness World Record for the longest car.

The cavernous interior, built to seat more than 75 people, stretches comically off into the distance behind Dezer as he sits toward the front. The built-in swimming pool has its own diving board, although you'd need some cojones to use it, and likewise the helipad can support up to 5,000 lb (2,270 kg), so it's functional. Indeed, Dezer has a small chopper land on it in the video below, but judging by how close the right skid is to the edge of the pad, you'd want a crazy-talented pilot on the job. 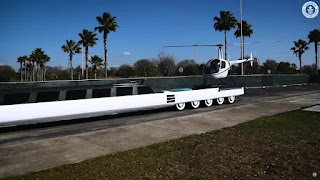 The minigolf course, pool with diving board, and helipad are not for the faint of heart
Guinness Book of Records

It's pure silliness; those American flags along the front are about as redundant as any we've ever seen. Dezer has no plans to take the thing out on the road any more, it's just going to sit and be an attraction at his museum.

Have a much closer look in the video below, which also details the horrendous state the thing fell into before it was restored.