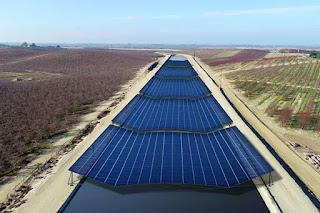 A rendering depicting how the photovoltaic panels will be situated over irrigation canals in California's Central Valley
Solar Aquagrid
While solar farms are a great source of green energy, many people don't like the fact that they occupy land which could otherwise be utilized for agriculture or housing. A new project is exploring an alternative, by placing solar panels over canals that will benefit from the shade.
Known as Project Nexus, the US effort is a collaboration between the University of California-Merced, California's Turlock Irrigation District, the California Department of Water Resources, and Solar Aquagrid – the latter San Francisco Bay-area company commissioned the research, and is overseeing the project.

The basic idea is that instead of placing arrays of photovoltaic panels on land that could be used for other purposes, those panels will instead be installed over lengths of existing irrigation canals. Not only is that space not really usable for much else, but the shading effect of the panels should significantly reduce evaporation and weed growth in the water.

As an added bonus, it is believed that the cooling effect of the water will help keep the panels from overheating, allowing them to operate more efficiently.

Plans call for a total of 8,500 feet (2,591 m) of solar panels to be built over three sections of the Turlock Irrigation District's canals in California's Central Vally, starting this Fall and ending in late 2024. The different canal sections range in width from 20 to 100 feet (6 to 30.5 m). 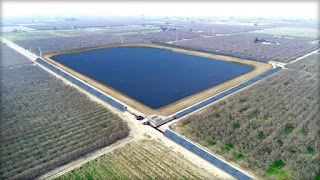 For the pilot project, 8,500 feet of panels will be installed
Solar Aquagrid
Based on research that was conducted last year at UC Merced, the project partners estimate that if 4,000 miles (6,437 km) of California's canals were covered with photovoltaic panels, evaporation could be reduced by up to 82 percent. This would save approximately 63 billion gallons (238 billion l) of water per year.

Additionally, if every canal in the state were covered with panels, approximately 13 gigawatts of renewable power could be generated – that figure is about half the amount needed to reach California's goal of full decarbonization by 2030.

"Solar canals are an example of an energy-water nexus that offers multiple sustainability benefits," says researcher Brandi McKuin, who will join the team at UC Merced next month. "Using water canals for solar infrastructure conserves water while producing renewable electricity, and avoids converting large tracts of land to solar development."

There may be some challenges to overcome, however. For one thing, the presence of the panels could make it difficult to access the canals for maintenance purposes. Additionally, it's possible that the expense of installing and maintaining the panels – along with delivering electricity from them to municipal grids – might outweigh the benefits they provide.

It is hoped that Project Nexus will be able to evaluate and address such concerns.