What is the Omicron BA.2 variant and is it more dangerous? 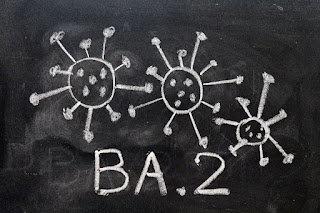 You may have heard there is a new variant in town. Labeled everything from "son of Omicron" to "stealth Omicron," its real scientific label at the moment is simply BA.2. So what is BA.2 and should you be worried about this newly emerging variant?

One of the mysteries surrounding Omicron’s emergence in late 2021 was its distinct differences from any SARS-CoV-2 variant that had appeared before. Researchers quickly concluded it was genomically closest to strains of the virus from early 2020, raising plenty of questions as to where it came from.

In November 2021, before the World Health Organization formally dubbed this new variant Omicron, researchers had clearly tracked three distinct genomic lineages labeled BA.1, BA.2 and BA.3. All three of these lineages seemed to emerge at the same time but it was BA.1 that was first to take the world by storm.

Ultimately, in late November, the WHO decided to incorporate all three lineages into the same moniker – Omicron.

Viral evolution expert Trevor Bedford points out that the differences between these two Omicron lineages are significant. Looking at amino acid changes between BA.1 and BA.2 (referred to by Bedford as 21K and 21L), he cites around 40 variations.

“For comparison Alpha, Beta and Gamma are each about as divergent from each other in terms of amino acid changes across the genome as Omicron 21K and 21L are from each other,” Bedford says.

Why is BA.2 unusual?

Sub-lineages are not unexpected in terms of viral evolution. As viruses are constantly mutating, scientists expect to see persistent shifting in a genome. More than 200 sub-lineages had been cataloged with the Delta variant before it was replaced by Omicron in late 2021.

However, the strange thing about Omicron is that it emerged with three distinct lineages, out of nowhere, and scientists are struggling to understand how that could be possible. Bedford believes the three Omicron subtypes may have arisen in a single person harboring a chronic infection that allowed the virus to mutate constantly for many months.

Other hypotheses point to Omicron emerging from animal infections. Although, because there are three distinct lineages, for this to be true it would mean there were three separate spillover events from animal to human, all around the same time late last year. Scientists indicate this is unlikely, although not impossible.

Is BA.2 starting to spread around the world?

BA.1, the variant we generally refer to as Omicron, shot off like a rocket around the globe over December and January. But many of the countries first to experience an Omicron wave have seen case numbers rapidly decrease in recent weeks, with many experts optimistically suggesting this variant could pass more swiftly than prior waves.

Recent reports from the UK and Denmark are raising concerns over BA.2

increasing its prominence. In England the proportion of BA.2 sequenced cases has skyrocketed from virtually nothing in late December to over five percent in some parts of the country by mid-January.

In Denmark, a country with extraordinarily robust genomic tracing systems, BA.2 is now thought to be dominant, accounting for most current new infections. This shift from BA.1 to BA.2 in Denmark occurred over a six-week span from mid-December to late January.

Early reports suggest BA.2 is slightly more transmissible than BA.1, which was already the most contagious form of SARS-CoV-2 to emerge. A new study out of Denmark compared rates of secondary household infections from primary cases with BA.1 and BA.2. This metric is known as the secondary attack rate.

A recent report from the UK Health Security Agency (UKHSA) looked at similar data in England. Between the 27th of December and the 11th of January transmission was higher in BA.2 households (13.4 percent) compared to BA.1 households (10.3 percent).

“We now know that BA.2 has an increased growth rate which can be seen in all regions in England,” said UKHSA chief medical advisor Susan Hopkins in a recent statement. “We have also learnt that BA.2 has a slightly higher secondary attack rate than BA.1 in households.”

Do vaccines still work against BA.2?

The data suggests little difference in vaccine effectiveness between the two Omicron subtypes. However, the new data out of Denmark found vaccinated persons experiencing breakthrough BA.2 infections were less likely to transmit the virus compared to vaccine breakthrough infections with BA.1.

So far both the Danish and UK data have seen no increase in hospitalizations relating to BA.2 compared to BA.1. Researchers are cautious to note it is still very early in the spread of this variant so it is difficult to confidently calculate its severity. And since hospitalizations and death can occur several weeks after initial symptoms appear it will take time to understand any differences in disease severity between BA.1 and BA.2.

Can I be reinfected with BA.2 after a BA.1 infection?

This is perhaps the million-dollar question that researchers are unable to answer at this point in time. We know from recent prior studies that, in general, Omicron has a great ability to evade immunity from earlier SARS-CoV-2 infections.

A report from Imperial College London in December found Omicron is 5.4 times more likely to reinfect a person compared to prior variants. Infection with a prior variant was calculated as offering as little as 19 percent protection from an Omicron reinfection.

This data was primarily calculated from BA.1 cases in relation to prior variants so it does not help greatly when trying to understand reinfection risk after an Omicron infection. A recent rise in cases in South Africa has led some scientists to suggest reinfection with BA.2 after a BA.1 infection is possible.

Seems that the second Omicron subvariant BA.2 may soon be about to cause cases to start rising again in South Africa... Or at least to stop the decline in new infections. Shows how fast immunity wanes & evolution can catch up. pic.twitter.com/3y4xqPgZ0L

However, it is too soon to say BA.2 will cause a big new wave of reinfections after a country passes through its initial Omicron wave. Trevor Bedford says it is possible for people to be infected with BA.1 and then BA.2 but he thinks it is more likely rising BA.2 cases are due to its increased transmissibility simply catching those who managed to avoid BA.1 infection during the first Omicron wave.

“… given that we’ll still have ~60% of the US that weren’t infected in the January Omicron 21K [BA.1] wave, this leaves the potential for a more transmissible virus to spread further in this fraction of the population,” Bedford hypothesized. “That said, I would guess we’ll see 21L [BA.2] create a substantially longer tail of circulation of Omicron than would have existed with just 21K, but that it won’t drive the scale of epidemics we’ve experienced with Omicron in January.”