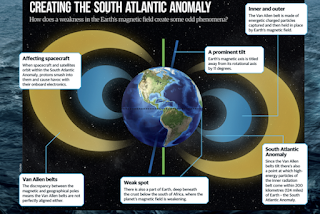 There is an area of the North Atlantic Ocean known as the Bermuda Triangle where ships,

airplanes and people have been known to disappear without explanation. No-one knows for certain why more than 50 ships and 20 planes have vanished since the mid-19th century. But that's not to say people haven't had some fun seeking an explanation.

Maybe it's to do with extraterrestrials, a force pulling objects under the sea or a link to the fabled lost city of Atlantis? Or perhaps it's simply bad weather, human error or heavy traffic in the region? In truth, the number of disappearances are actually no more than in any other well-traveled area of the ocean, yet, still, the conspiracy theories persist.

If we look skyward we can explore a similar phenomenon dubbed the "Bermuda Triangle of space" – a vast region above Earth has been known to wreak havoc on spacecraft that happen to enter the area. In this case, nobody is claiming that craft are suddenly vanishing into thin air, but the disruption that's being caused is nevertheless serious, and it poses great problems for both equipment and astronauts.

The Bermuda Triangle of space – or the South Atlantic Anomaly (SAA) as it is formally known – lies above the South Atlantic, stretching from Chile to Zimbabwe. It sits at the point where the inner Van Allen radiation belt comes closest to Earth's surface. Here, Earth's magnetic field is particularly weak.

To explain, Earth has two Van Allen belts – a couple of doughnut-shaped rings of charged particles that surround our planet, held in place by Earth's magnetic field. The inner part consists mainly of high-energy protons and the outer part is mainly electrons. Because the belts trap the particles that are shooting from the surface of the sun, they end up protecting the surface of the planet from harmful radiation.

At the location of the SAA, however, the particles of solar cosmic rays are not being held back to the same extent as they are elsewhere above the planet. As a result, solar rays come as close as 124 miles (200 kilometers (124 miles) to the Earth's surface and the more intense solar radiation results in an increased flux of energetic particles in this area.

"I'm not fond of the [Bermuda Triangle of Space] nickname, but in that region, the lower geomagnetic field intensity eventually results in a greater vulnerability of satellites to energetic particles, to the point that spacecraft damage could occur as they traverse the area," said John Tarduno, professor of geophysics at the University of Rochester.

"Satellites passing through this region will experience higher amounts of radiation to the point that damage could occur," Tarduno told All About Space. “Think about an electrical discharge or arc. With more incoming radiation, a satellite can become charged, and attendant arcs can result in serious damage."

Ordinarily the Van Allen belts stretch at an altitude of between 1,000 and 60,000 km (620 and 37,000 miles(1,000 and 60,000 km) above Earth's surface. The low altitude of the radiation hotspot, however, puts it within the orbit of certain satellites, which become bombarded by protons that exceed energies of 10 million electron volts (eV) at a rate of 3,000 "hits" per square centimetersr per second.

As Tarduno pointed out, this affects the spacecraft's onboard electronic systems, which hampers the operation of these objects. To protect them from potential hardware damage, space agencies and other satellite operators power them down so that the anomaly doesn't end up knocking out onboard computers and interfere with data collection.

Shutdowns protect many important studies, including those using the Hubble Space T telescope, which passes through the SAA 10 times a day, spending a good 15% of its time there. Hubble is unable to collect astronomical data during these moments, which is not ideal, but necessary. Failing to take precautions would likely lead to system failure.

Certainly, the more complex electronics have become, the more potential there is for problems to emerge. Satellites using the microwave tracking system DORIS — which stands for Doppler Orbitography and Radiopositioning Integrated by Satellite — for example, see a resulting shift of the onboard oscillator frequency.

Astronauts have also witnessed problems with computers on board spacecraft that fly in the vicinity of the SAA. "Putting equipment into a 'safe mode' means operations that are more vulnerable to radiation are curtailed," Tarduno said.

Indeed, the SAA is why strong shielding is in place over the most frequently occupied parts of the International Space Station (ISS), such as the gallery and the sleeping quarters, reducing the amount of radiation the astronauts are exposed to. It's also why astronauts wear dosimeters (devices that measure their personal exposure to ionising radiation in real time) that send out a warning if they reach dangerous levels.

But why is the magnetic field weaker above the South Atlantic? It's because of the shape of Earth, which is not completely round. The Earth bulges slightly in the middle, and the planet's magnetic dipole field is offset from its center by about 300 miles (500 km (300 miles). Where the dip lies, the charged particles and cosmic rays are closer to Earth's surface and provide less insulation from interplanetary space. Even so, this magnetic bubble still prevents solar wind from reaching the surface.

The magnetic field is sustained by a dynamo process that results from the flowing liquid metal in Earth's outer core that generates electric currents. When the planet rotates on its axis, the turbulent movement of molten, charged material is what forms the magnetic field, and gives the planet the north and south poles at the surface. Yet the poles aren't permanent, as Earth's magnetic field is constantly shifting; growing stronger and weaker as it moves around. At the moment, the magnetic field is weakening in the area of the SAA, which means the area is growing.

NASA is very much on the case. On 10 October 2019, a Northrop Grumman Pegasus XL rocket launched NASA's Ionspheric Connection Explorer satellite into orbit. Part of its mission has been to monitor the weak spot in the field and it has shown that the “dent” in the magnetic field is actually moving westward and splitting in two. As NASA saysys, this is creating additional challenges for satellite missions.

"Even though the SAA is slow-moving, it is going through some change in morphology, so it's also important that we keep observing it by having continued missions because that's what helps us make models and predictions",” said Terry Sabaka, a geophysicist at NASA's Goddard Space Flight Center in Maryland. 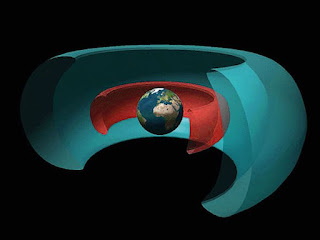