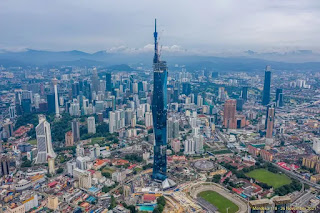 Merdeka 118 reaches an impressive height of 678.9 m (2,227 ft) in Kuala Lumpur, Malaysia
Fender Katsalidis
Move over Shanghai Tower, a new megatall is under construction that will take your spot as world's second-tallest skyscraper. Rising to an impressive height of 678.9 m (2,227 ft), the Merdeka 118 in Kuala Lumpur has now officially topped out – that is, reached its maximum height – and is on track to be completed in late 2022.
The megatall skyscraper is designed by Australia's Fender Katsalidis, which is also behind the eye-catching Australia 108 tower, and it has been under construction for five years. Its exterior is inspired by patterns from Malaysian arts and crafts and is made up of a sculptural arrangement of triangular glass sections.

Though very tall skyscrapers are regularly being constructed around the world, it's rare to see one that shakes up the top-five tallest list. However, like many of these massive towers, Merdeka 118's height is actually slightly complicated.

While it does indeed reach a height of 678.9 m (2,227 ft), this includes its spire. Taking that away, it's a maximum height of 644 m (2,113 ft), which still puts it ahead of Gensler's 632-m (2,073-ft)-tall Shanghai Tower and comfortably in the world's second-tallest building position, behind the 828-m (2,717-ft)-tall Burj Khalifa. It's also worth noting that until it's finished and open for business, the Merdeka 118 won't be recognized in the Council on Tall Buildings and Urban Habitat rankings, which is the foremost resource when it comes to skyscraper height – so we'll need to wait until late-2022 until its second-tallest ranking is official. Further details are still light at this stage, but we do know that the tower's interior measures roughly 288,000 sq m (3.1 million sq ft) of floorspace, which is spread over 118 floors, and split between office space, hotel space, retail space, an observation point, and luxury apartments. And that the Merdeka 118 is situated within a large car-free public space designed by landscape architects Sasaki which includes greenery and water features.

"We feel incredibly proud to have contributed to the creation of this building and its host of community assets which enrich one of the most culturally significant sites in Malaysia," says Karl Fender, founding partner of Fender Katsalidis. "First and foremost, our priority was to respect this site and harness every opportunity to create a tower that enriched the social energy and cultural fabric of the city. In addition, the achievement of creating the second-tallest building in the world celebrates the years of planning, problem-solving, collaboration and human endeavor required to realize a building of this complexity. Achieving this height milestone is a welcome bonus."