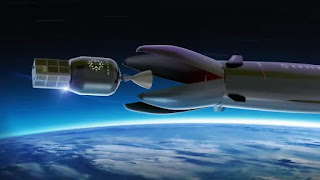 Rocket Lab's next generation Neutron rocket will have a fully reusable first stage with an integrated fairing that opens like a flower. (Image credit: Rocket Lab)

yet promise to take reusability to the next level, complete with a 'Hungry Hippo' nose cone designed for easier recovery and reuse.

Rocket Lab CEO Peter Beck unveiled design details of the new medium-lift booster — the Neutron rocket —in a video briefing today (Dec. 2). It is expected to make its first flight in 2024.

First introduced in March, Neutron will consist of two booster stages. The first stage features an integrated four-blade payload fairing that opens in orbit like a flower to release the second stage carrying the payload. The entire first stage, fairing included, is designed not only to be fully reusable but also to enable almost immediate relaunch. The second stage that delivers payloads to their target orbits is currently expendable.

In an earlier interview, Beck told Space.com that Neutron will operate more like an aircraft than a present-day rocket and require a minimum amount of servicing between flights. During today's presentation, he elaborated on exactly how Rocket Lab plans to achieve the goal, making several digs at competitor SpaceX at the same time."This is a reusable launch vehicle, so that means it's gonna land. So you don't want any deployable landing legs, you want a nice, big, wide static base," Beck said in the presentation, referring to the landing gear of SpaceX's Falcon 9, Falcon Heavy and Starship vehicles, all of which have deployable legs. "It's really important also to be able to return the vehicle to the launch site, not costly barges way out in the middle of the ocean."

The carbon-fiber 3D-printed Neutron will feature a new engine called Archimedes, which will burn methane and liquid oxygen, one of the most sustainable rocket fuel combinations available, according to rocket propulsion scientists.

Seven Archimedes engines will power Neutron's first stage, providing 1 meganewton of thrust each. The second stage will rely on a single vacuum-optimized Archimedes engine, Rocket Lab said in a statement. 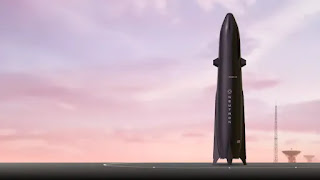 An artist's impression of Rocket Lab's next generation Neutron rocket, referred to by the company's CEO Peter Beck as a "2050 rocket". (Image credit: Rocket Lab)

The combination of ultra-light carbon fiber and an optimized aerodynamic body will enable Rocket Lab to reduce the weight of the rocket, which will allow the engines to operate cheaply and with greater margins, the company said.

"Neutron's lightweight carbon composite structure means Archimedes does not need the immense performance and complexity typically associated with larger rockets and their propulsion systems," Rocket Lab said in a statement. "By developing a simple engine with modest performance requirements, the timeline for development and testing can be drastically accelerated."

The company said that both the rocket body and the engine will be 3D-printed using a technique called automated fiber placement, which can manufacture the entire engine within one day.

Neutron will be optimized to loft into orbit batches of megaconstellation satellites but will also have features to accommodate human spaceflight.

Throughout the presentation, Beck referred to Neutron as a "2050 rocket," hinting at Rocket Lab's ambition to play a greater role in the future of space travel. 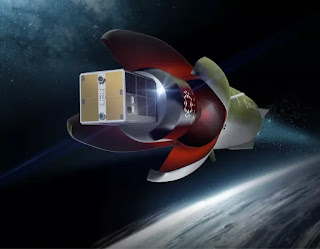 Rocket Lab also said the rocket could launch humans and payload to the moon and Mars, the maximum capacity for a lunar trip being 4,400 pounds(2,000 kg).

When first announced, Neutron was a surprise deviation from Rocket Lab's previous strategy that focused on expandable micro-launchers serving the small satellite market.

In the past, Beck himself claimed the company had no interest in reusability or big rockets, and even promised to "eat his hat" if the company pursued them in the future. The company's first rocket, called Electron, is currently an expendable launch vehicle for small payloads of up to 660 pounds (300 kg), although the company hopes to reuse its first stage as well.

In a video in March this year, in which he first unveiled plans to build Neutron, Beck did actually eat a piece of a blended baseball cap.

In August this year, Rocket Lab completed a merger with investment company Vector Acquisition Corporation in a move designed to help access funding for Neutron development. The company listed on the Nasdaq stock exchange shortly after that.