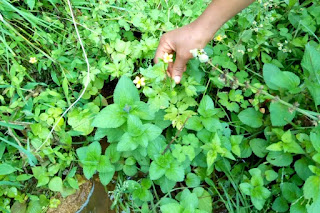 The Ranunculus multifidus plant, which is a member of the buttercup family
Prof. Dr. Kaleab Asres
For many years now, people in parts of Africa have used a tea made from the crushed leaves of a certain plant to treat malaria. Scientists recently identified the active ingredient, and believe that it could be used in alternative pharmaceutical treatments for the disease.
The plant in question is a member of the buttercup family – its scientific name is Ranunculus multifidus. When it gets injured and the insides of its cells get exposed to the air, it produces a compound known as anemonin. It is this chemical that was found to be effective against malaria.

In a study conducted by scientists from Ethiopia and Germany, mice were infected with the malaria-causing Plasmodium berghei parasite, then treated with either anemonin or the commonly used malaria-treatment drug chloroquine. A control group was not treated at all.

It was found that although the anemonin wasn't as effective as the chloroquine, it nonetheless reduced weight loss in the treated mice (as compared to the control group), plus it helped stabilize their body temperature.

The team believes that like chloroquine, anemonin works by affecting the metabolism of the parasites. That said, the compound likely attacks the microbes at a different part of their body. This is an important consideration, as it suggests that anemonin may be effective in geographical regions where the parasites have developed a resistance to chloroquine.

Further studies are being planned to identify the exact mechanism at work, and to increase the effectiveness of anemonin treatment. Clinical trials on human malaria patients may follow within several years.

The research was conducted by scientists from Ethiopia's Arba Minch and Addis Ababa universities, along with Germany's Martin Luther University Halle-Wittenberg. It is described in two papers that were recently published in the journal Molecules.