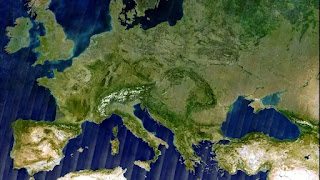 Europe is already 2.2 degrees Celsius warmer than before the industrial revolution while the Arctic has already warmed up by 3 degrees C.

Europe's climate is warming much faster than the rest of the world and scientists are trying to understand why.

The world is nowhere near on track to limiting the global temperature rise to the 1.5 degrees Celsius required by the Paris Agreement, the international treaty negotiated at the United Nations Climate Change Conference (COP21) in Paris in 2015. In fact, latest predictions show that globally, the climate is set to get on average 2.4 degrees C warmer compared to the pre-industrial era, unless emissions of greenhouse gases are drastically cut.

But not all parts of the world are set to be hit equally. Europe, in fact, has already passed the 1.5-degree C threshold and is currently 2.2 degrees C warmer than it was before the industrial revolution, Samantha Burgess, deputy director for climate change services at the European Earth observation program Copernicus, said Tuesday (Nov. 2) in a briefing at the UN Climate Change Conference (COP26) that is concluding this week in Glasgow, Scotland.

But exactly why the old continent is heating up so fast is still a bit of a puzzle, Burgess told Space.com. This puzzle most certainly has something to do with the proximity of the Arctic, the ice cap around the North Pole, which is, by far, Earth's fastest warming region.

"We know that the Arctic is warming about three times faster than the global average rate," Burgess said. "It's already 3 degrees C warmer than in the pre-industrial times. It is quite complicated to unpick the scientific reasons behind why the warming is happening so much faster there."

Scientists know that the speed of the Arctic warming is facilitated by changes to the planet's albedo, the ability of a surface to reflect sunlight, Burgess said. The pristine white ice around the poles acts like a mirror, reflecting most of the incoming sunlight rather than absorbing it. When ice melts, lakes form on the ice sheet, changing its albedo. The water absorbs more sunlight and warms up. But strangely, the same effect is not observable in Antarctica, the Arctic's South Pole sister.

"In Antarctica, the [satellite] signal is much more variable," said Burgess. "You'll get some areas of sea ice loss and regional warming, but then you get some regions of Antarctica that are actually cooler than the global average. Whereas in the Arctic we are seeing pretty much a steady decline [of ice cover] since the satellite records began."

Scientists think that the greater resilience of Antarctica might be due to the fact that it is a proper continent and not just a floating ice mass, Burgess said. Although similar in size to the Arctic, the southern ice cap seems to benefit from the mass of land underneath it. 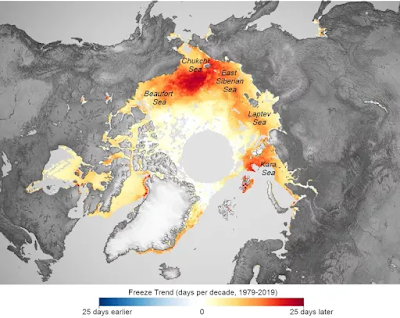 The Arctic is the world's fastest warming region. It is already on average a whopping 3 degrees Celsius warmer than before the industrial revolution. (Image credit: Joshua Stevens/NASA Earth Observatory)

The speedier warming in the Arctic also leads to faster thawing of permafrost, or permanently frozen soil that harbors undecomposed remains of dead animals and plants. All it takes is for the temperature to stay above 0 degrees C (32 degrees Fahrenheit) for a period of time. The ground, which has been frozen for millenia, starts to melt, triggering the decay of everything that lies within. The decomposing matter releases carbon dioxide and methane, potent greenhouse gases that further accelerate the warming. The vicious cycle is spinning ever faster.

"The thawing of the permafrost creates a change in albedo, which means that the polar region is less reflective than it was in the past," said Burgess. "It's absorbing more heat energy, which in turn is raising the temperature locally, and also raising the sea surface temperatures that are recorded locally. And then this has feedback on further thawing, further sea ice melting."

A recent study based on data from the European Sentinel-1 and Sentinel-2 satellites found that this permafrost thawing is literally making the ground around the northern polar circle unsteady. The study, published in the journal Environmental Research Letters on Tuesday (Nov. 9), found that within the next 30 years 55% of buildings, roads and pipelines located within 62 miles (100 kilometers) of the Arctic coastline will find themselves on an unstable, melting ground.

Among the many full-on effects of climate change that the Arctic regions are struggling with are increasingly frequent summer wildfires. Speaking at the same briefing at COP26, Vincent Henri Peuch, the head of the Copernicus Atmosphere Monitoring Service (CAMS), said that while globally the number of wildfires is decreasing, Siberia, the northeastern part of Russia adjacent to the Arctic ice-cap, is burning more than ever.

"When you sum up all the emissions of carbon dioxide emitted year after year at the global scale, you will see a decreasing trend," Peuch said. "This decreasing trend is driven by the trends in savannah fires in the tropics which are going down. But for a number of years now, we have seen very extreme fires in Siberia."

The northeastern parts of Siberia, such as the Russian Sakha Republic, have been hit the most, Peuch added. This frosty region covered in permafrost and tundra has witnessed an uncontainable inferno of raging wildfires this year. But it's not just the destruction the fires cause that causes concern. The carbon dioxide released by the wildfires further feeds the vicious cycle of warming. This year, wildfires in the Sakha Republic produced more greenhouse gas than Europe's worst polluter Germany emits in a year, according to Copernicus data.

"This is a big concern because it's peatland that is burning there, not vegetation," said Peuch. "When peatland is burning, it is unlocking the carbon store that is permafrost. It changes the landscape and affects the carbon cycle."

As the fires rage in the vicinity of the Arctic, the ash they produce deposits on the ice cap, further altering its albedo. The darkened ice now absorbs heat, instead of reflecting it, further feeding the vicious cycle of unstoppable warming.

In fact, one of the Sentinel satellites spotted a fire raging in the far Russian northeast as recently as Nov. 3. The fire, likely lit by lightning, burned in freezing temperatures of minus 20 degrees C (minus 4 degrees F), defying the efforts of the firefighters who struggled with frozen water pipes, according to a Copernicus statement.

What does it mean for Europe?

The year 2020 was the warmest on record in Europe, with an average temperature 1.9 degrees C above the long-term average of 1981-2010 and 0.4 degrees C warmer than the previous record-setting year, according to Burgess.

This warming is already triggering unprecedented weather events on the continent, which has so far been spared the worst of the possible whims of the weather (such as hurricanes, typhoons and tornadoes). For example, the floods that ripped through western Europe this summer, killing 200 people in Germany alone, were unprecedented in recorded history, Vera Thiemig, scientific officer and researcher at the Joint Research Centre of the European Commission, said in the briefing.

"We saw the floods coming and we alerted the national institution so that they could prepare, but what arrived was so much worse than what they had seen before," Thiemig said. "They expected a 100-year flood but what they were facing was a flood with a more than 1,000-year return period."

German Chancellor Angela Merkel described the destruction caused by the deluge as surreal. But Thiemig warns that in the years to come a flood of 1,000 years may become a much more regular visitor.

Burgess said that all is not lost and the future of Europe, as well as that of other continents, depends on the action the world takes.

"Up until 2030, we'll see more extreme events, we'll get hotter summers, milder winters and more severe storms," Burgess said. "But going up to 2050 to 2100, it really depends on which scenario we end up on as to how extreme that climate could be."

At the moment, the world seems set to cross the dreaded 1.5 degree C threshold in about 2034.

The conclusions of the COP26 summit, however, offer some hope.  More than 100 nations have committed to reduce emissions of methane, which is 80 times more warming than carbon dioxide, by 30% by the end of this decade. About 140 states pledged to achieve carbon neutrality by 2050. The question is, whether the action is coming fast enough.