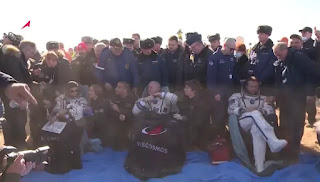 after 12 days of shooting a movie aboard the International Space Station.

Russian actress Yulia Peresild and producer Klim Shipenko landed with cosmonaut Oleg Novitskiy of the Russian federal space corporation Roscosmos on Sunday (Oct. 17). The three descended aboard the Soyuz MS-18 spacecraft to a touchdown at 12:35 a.m. EDT (0435 GMT or 10:35 a.m. local time) on the steppe of Kazakhstan.

The landing concluded 191 days in space for Novitskiy, who wrapped up his stay on the station by playing a bit part in the movie Peresild and Shipenko were there to film. A joint production of Roscosmos, the Russian television station Channel One and the studio Yellow, Black and White, "Вызов" ("Challenge" in English) follows the story of a surgeon (Peresild) who is launched to the station to perform emergency surgery on a cosmonaut (Novitskiy).

Shipenko served several behind-the-scene roles while on orbit, including director, make-up artist, sound editor and cinematographer. Cosmonauts Pyotr Dubrov and Anton Shkaplerov, the latter having launched with Peresild and Shipenko on board Soyuz MS-19 on Oct. 5, also took part in the filming.

Novitskiy, Peresild and Shipenko began their journey home with the undocking of Soyuz MS-18 from the Nauka multipurpose laboratory module on Saturday at 9:13 p.m. EDT (0135 GMT on Sunday). The spacecraft performed a deorbit burn and shed its orbital and propulsion modules before re-entering Earth's atmosphere and descending under a parachute for a soft landing.

Recovery teams were in place to help the crew out of the descent capsule and perform initial medical checks. Novitskiy, Peresild and Shipenko were then to be flown by helicopter to the Kazakh city of Karaganda before a Gagarin Cosmonaut Training Center aircraft transports them back to Star City, outside of Moscow. 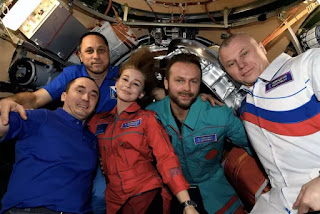 The departure of Soyuz MS-18 marked the end of Expedition 65 and the start of Expedition 66 aboard the space station. Led by Thomas Pesquet of the European Space Agency (ESA), the station is now crewed by cosmonauts Shkaplerov and Dubrov, astronauts Shane Kimbrough, Megan McArthur and Mark Vande Hei with NASA and Japan Aerospace Exploration Agency (JAXA) astronaut Aki Hoshide. 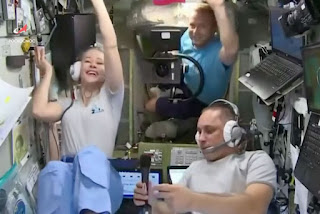 Roscosmos first announced the film project in November 2020. Peresild, 37, was chosen for the role from a pool of 3,000 applicants and 20 finalists. Together with her backup, Alena Mordovina, Roscosmos said that the casting also tested a new model for selecting and training individuals under an abbreviated schedule.

An accomplished actress who has appeared in award-winning Russian movies and television series, as well as acted on stage at the Malaya Bronnaya theater in Moscow, Peresild became the first professional actor to fly into space. During her time on orbit, William Shatner (Star Trek's Captain Kirk) became the second flying aboard a Blue Origin suborbital flight.

Peresild also became the fifth Russian woman to fly in space out of the 71 female astronauts worldwide.

Shipenko, 38, is a film director, screenwriter, actor and producer. His earlier credits include the 2017 feature film "Salyut 7," which was loosely based on the real 1985 mission to the last of the Soviet Union's Salyut-class space stations. 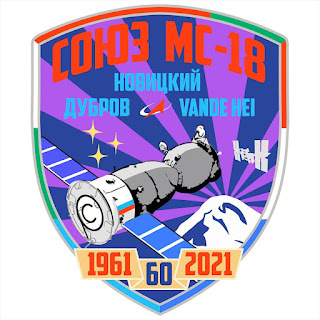 Novitskiy, 50, has now completed three space missions for a total of 531 days in space. During Expedition 64/65, he conducted three spacewalks, logging 22 hours and 38 minutes working in the vacuum of space. He was previously a member of the Expedition 33/34 and Expedition 50/51 crews in 2013 and 2017, respectively.

Join our Space Forums to keep talking space on the latest missions, night sky and more! And if you have a news tip, correction or comment, let us know at: community@space.com.