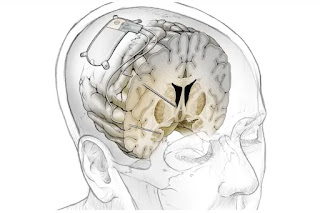 The implant monitors brain activity for patterns of depression and responds with short bursts of electrical stimulation designed to disrupt cycles of depressive brain activity
UCSF
An incredible proof-of-concept study has demonstrated how a brain implant can treat severe depression by electrically stimulating certain brain regions. The cutting-edge experimental implant monitors neural activity for biomarkers signaling the onset of depression and briefly zaps a key brain region in real-time to disrupt the cycle and improve mood symptoms.
“This study points the way to a new paradigm that is desperately needed in psychiatry,” explains Andrew Krystal, co-senior author on the new study. “We’ve developed a precision-medicine approach that has successfully managed our patient’s treatment-resistant depression by identifying and modulating the circuit in her brain that’s uniquely associated with her symptoms.”

Published in the journal Nature Medicine, the new study reports on the first human patient to be treated with the experimental brain implant, the culmination of years of research. Sarah, a 36-year-old woman with childhood onset severe, treatment-resistant depression, had tried every therapy to treat her condition – from multiple  new study was published in the journal Nature Medicine.

Here's a look at the breakthrough treatment from the UC San Francisco team:ressants to electroconvulsive therapy.

“I was at the end of the line,” she explains. “I was severely depressed. I could not see myself continuing if this was all I’d be able to do, if I could never move beyond this. It was not a life worth living.”

Prior research had worked to find associations between certain mood states and patterns of electrical brain activity. Other studies focussed on specific brain regions that improved symptoms of depression when stimulated with jolts of electricity.

“This new study puts nearly all the critical findings of our previous research together into one complete treatment aimed at alleviating depression,” says co-senior author Edward Chang.

The first step in the research was to closely track electrical activity in Sarah’s brain over a period of 10 days in order to identify specific patterns that correlate with depressive symptoms. The researchers homed in on a particular area in the amygdala that consistently popped with activity signaling the onset of acute depressive symptoms.

“In the early few months, the lessening of the depression was so abrupt, and I wasn’t sure if it would last,” Sarah says. “But it has lasted.”

Within days of the personalized device being implanted, Sarah’s depression began to lift. Before the implant she scored 36 out of 45 on the Montgomery–Åsberg Depression Rating Scale (MADRS). Just 12 days after the implant had been turned on her score had dropped to 14, and several months later it had fallen further, eventually landing on a score of 10 which is a formal score signifying clinical remission.

“The idea of stimulating somebody and just a few seconds later, them saying, ‘My depression is gone’ … it is just stunning,” Krystal said to StatNews. “They have this experience where they haven’t felt this good in years, they get hope. They feel like there’s a sense of relief that it feels like it’s not their fault because it’s changeable by modulating brain circuitry.”

Jonathan Roiser, a neuroscientist from University College London, calls this new study “exciting” but stresses it is just one single patient. It is unclear how personalized a system such as this will need to be to work in other patients.

“Although this kind of highly invasive surgical procedure would only ever be used in the most severe patients with intractable symptoms, it is an exciting step forward due to the bespoke nature of the stimulation,” says Roiser, who did not work on this new research. “It is likely that if trialled in other patients, different recording and stimulation sites would be required, as the precise brain circuitry underlying symptoms probably varies between individuals.”

Katherine Scangos, first author on the new study, agrees there is plenty more work to do before this kind of therapy even comes close to real-world clinical use. Sarah has so far displayed consistent improvement over the 12 months she has had the implant, but the long-term effects of the therapy are still unknown.

“We need to look at how these circuits vary across patients and repeat this work multiple times,” says Scangos. “And we need to see whether an individual’s biomarker or brain circuit changes over time as the treatment continues.”

Since the success with Sarah, the researchers have recruited two more participants for this ongoing trial. The ultimate plan is to recruit 12 participants in total and the current trial is set to run until 2035. So this is not something that will be readily available anytime soon.

However, as a proof-of-concept these findings are ground-breaking. Demonstrating a brain implant can sense specific activity in real-time, respond with targeted electrical stimulation that subsequently influences a person’s mood is inarguably an incredible milestone, particularly in regards to prospective mental health treatment in the future.

"The idea that we can treat symptoms in the moment, as they arise, is a whole new way of addressing the most difficult-to-treat cases of depression,” says Scangos.

The new study was published in the journal Nature Medicine.

Here's a look at the breakthrough treatment from the UC San Francisco team: