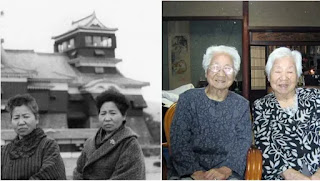 Two sisters in Japan have been declared the world's oldest identical twins, at age 107,

according to news reports.

The sisters, Umeno Sumiyama and Koume Kodama, were born on Nov. 5, 1913, making them 107 years and 300-plus days old, according to the Associated Press. That breaks the previous record for world's oldest identical twins, held by Kin Narita and Gin Kanie, also from Japan, who were 107 years and 175 days old, the AP reported. (Kin Narita died in 2000 at age 107, according to The Guardian, and Gin Kanie died a year later at 108.)

Sumiyama and Kodama were certified as the world's oldest twins on Monday (Sept. 20) by Guinness World Records. The sisters are currently living in separate locations and were presented with their certificates by home care staff, the organization said in a statement. 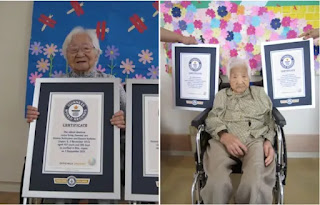 They were born on Shōdoshima Island in Japan into a large family, with 11 total children, according to the AP. After elementary school, Kodama moved to Kyushu in southern Japan to work as a maid, while Sumiyama remained on the island. The pair rarely saw each other for decades until they turned 70, when they reconnected and started making pilgrimages together, the AP reported.

How long a person lives is thought to be influenced by genetics, environment and lifestyle, according to the National Institutes of Health (NIH). Scientists have been studying centenarians (people who live to 100) and "supercentenarians" (people who live to 110 and beyond) to better understand the factors that contribute to long life spans.

Some scientists speculate that lifestyle factors, including diet and exercise, play an important role in the first 80 years of life, after which genetic factors become more and more important in keeping a person healthy as they age, according to the NIH.

Genetic variants that have been linked to longer life spans include variants in the ABO, CDKN2B, APOE and SH2B3 genes, Live Science previously reported. These variants have been found to be more common in centenarians than people with average life spans.

Another recent study found that centenarians may have special gut bacteria that help ward off infections, Live Science previously reported.

The oldest living person today is Kane Tanaka, from Fukuoka, Japan, who is currently 118 years old, according to Guinness World Records.