Mercedes-Benz cars can now warn one another of potholes 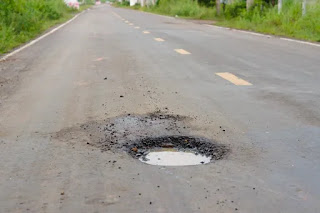 Vehicle-to-vehicle communications systems already allow cars to warn one another of hazards such as accidents or road work. Mercedes-Benz is now building on the technology, providing alerts of speed bumps and potentially dangerous potholes.

The functionality has been added to the automaker's existing Car-to-X Communication system, and is applicable to Mercedes-Benz passenger cars built in or after 2016.

Although a variety of models can receive the warnings, the alerts are generated by new C-Class and S-Class automobiles, along with the EQS electric sedan. In those vehicles, a speed bump or pothole is detected by a sudden compression and rebound of the suspension on the front axle, followed by the same on the rear axle.

When this happens, the vehicle's Car-to-X system will send an alert to the Mercedes-Benz Cloud, from which it will be relayed to other Car-to-X-equipped automobiles. Approximately 10 seconds before the drivers of those cars reach the pothole or speed bump, they will be warned by an icon on the vehicle's display, and by an audible alert.

The latter will take the form of "Traffic event ahead" in most Mercedes vehicles, although it will be stated as "Look out, pothole" or "Attention, speed bump" in new C-Class, S-Class or EQS models.

According to the company, the pothole/speed bump warning system is available now in select markets worldwide, in all 36 languages recognized by the Car-to-X system. Jaguar Land Rover has been working on a similar setup.