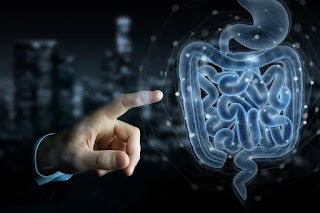 New research affirms how astonishingly complex the relationship between our general health and the trillions of micro-organisms living in our gut is
sdecoret/Depositphotos
There are trillions of micro-organisms living inside every one of us. Most of these tiny tenants reside in our gut, and perhaps one of the most important medical discoveries of the past few decades has been understanding just how much of a role these organisms play in our general health and well-being.
Exactly how the bacteria living in our gut influences disease is a question many researchers are trying to answer. However, unpacking the vast complexity of the human microbiome is proving to be an immense challenge.

Chirag Patel, from Harvard Medical School's Blavatnik Institute, has been working for years to try and find connections between bacterial composition in the gut and human disease. In 2019 Patel and colleagues published their first study attempting to catalog all the genes in the collective human microbiome.

The stunning genetic diversity detected in this early study suggested every person’s microbiome could be so unique there may be no universal "one-size-fits-all" approach to targeting gut bacteria for disease treatment. The complex nature of microbiome science may be daunting to some but Patel and colleagues from Harvard Medical School and the Joslin Diabetes Center were up for the challenge, seeing this as a biostatistics problem that can be solved by finding the right computational model.

“The ultimate goal of computational science is to generate hypotheses from a huge swath of data,” explains Braden Tierney, first author on the new study. “Our work shows that this can be done and opens up so many new avenues for research and inquiry that we are only limited by the time, people, and resources needed to run those tests.”

Instead of trying to home in on single bacterial species that correlates with a certain disease in everyone – a possibly futile pursuit – the new study introduces the concept of “microbiome architectures”. These are collections of microbial features that can be more universally linked with certain diseases.

“… we compute architecture by identifying the complete set of associations between the microbiome and a given host disease,” the researchers write in the study. "The concept and construction of architectures sidesteps the challenge of building grand views of a 'normal' microbiome. Architectures instead enable the identification of specific (but still holistic) microbial factors associated with specific host phenotypes across sources of metagenomic variation.”

The new study set out to identify patterns of bacterial genes that could be linked to certain human diseases. Seven specific human diseases were chosen for this particular study, including type 2 diabetes, colorectal cancer and atherosclerotic cardiovascular disease.

However, particular genes from a subspecies of Solobacterium moorei could be reliably associated with colon cancer. Patel notes this discovery affirms specific bacterial strains and gene signatures are more relevant to human disease risk than general bacterial families.

“This opens a window for the development of tests using cross-disease, gene-based indicators of patient health,” says Tierney. “We’ve identified genetic markers that we think could eventually lead to tests, or just one test, to identify associations with a number of medical conditions.”

The new research explicitly makes clear it was not designed to offer insights into how certain bacteria could play a role in the development of disease. Future research will have to dig into those questions. Instead, this work is looking to find universal patterns of bacterial genes that correlate with disease in order to inform future research, and possibly influence the development of novel diagnostic tools.

The new study was published in Nature Communications.