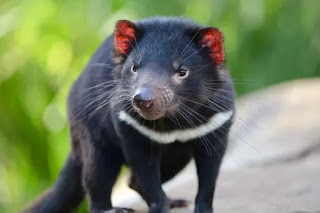 were released back into the wilds of mainland Australia, a place they haven’t called home in more than 3,000 years. And now, the first new baby devils have been born in this new refuge, cementing hopes for the species.

In 2020, 26 Tasmanian devils were set free in a 1,000-acre (404.6-ha) sanctuary in Barrington Tops, about 200 km (124 miles) north of Sydney. This safe new home is designed to protect them from introduced long-time rivals like cats and foxes, as well as other dangers like fire, cars and disease.

That last point is the most pressing. Devils in their native Tasmania have been devastated in recent years by a deadly form of cancer called Devil Facial Tumor Disease (DFTD) which has reduced their numbers so dramatically that they’re now considered endangered.

To protect the species from extinction, Aussie Ark, Re:wild and WildArk set out to start a new healthy population on mainland Australia, where the devils naturally went extinct over 3,000 years ago.

And the new population seems to have taken well to their new home. The organizations are reporting the birth of seven new devil joeys, confirmed by checking the pouches of the reproductive females.

“We have been working tirelessly for the better part of 10 years to return devils to the wild of mainland Australia with the hope that they would establish a sustainable population,” says Tim Faulkner, president of Aussie Ark. “Once they were back in the wild, it was up to them, which was nerve wracking. We had been watching them from afar until it was time to step in and confirm the birth of our first wild joeys. And what a moment it was!”

The team says it will conduct follow-up pouch checks over the next few weeks, and will monitor the mothers on camera traps. The births indicate that the program is working well, and the organization estimates that 20 will be born this year.

“The fact that the adults have adapted so quickly is remarkable and the joeys are one of the most tangible signs that the reintroduction of Tasmanian devils is working,” says Don Church, president of Re:wild. “This doesn’t just bode well for this endangered species, but also for the many other endangered species that can be saved if we rewild Australia, the country with the world’s worst extinction rate. Tasmanian devils are ecosystem engineers that can restore and rebalance the wild to the benefit of other native wildlife, to the climate, and to people.”

Another 20 devils are due to be released in the sanctuary in 2021, followed by 20 more in 2022. Longer term, other threatened native species, including wallabies, bettongs, quolls, bandicoots and potoroos, will be introduced to the region to help restore the natural balance.