Chernobyl's nuclear fuel is 'smoldering' again and could explode 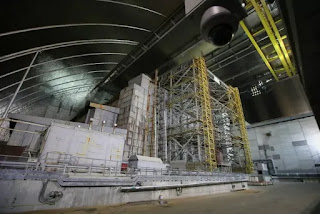 The concrete structure known as The Shelter seals in the remains of Chernobyl's ruined Unit Four reactor. (Image credit: Getty)

in an inaccessible basement of the wrecked Chernobyl nuclear power plant in Ukraine, according to news reports.

Researchers monitoring the plant — which infamously exploded in a deadly 1986 meltdown — have detected a steady spike in the number of neutrons in an underground room called 305/2. The room is full of heavy rubble, concealing a radioactive mush of uranium, zirconium, graphite and sand that oozed into the plant's basement like lava, before hardening into formations called fuel-containing materials (FCMs).

For now, this radioactive waste is smoldering "like the embers in a barbecue pit," Neil Hyatt, a nuclear materials chemist at the University of Sheffield in the U.K., told Science magazine. However, it's possible that those embers could fully ignite if left undisturbed for too long, resulting in another explosion.

This potential explosion wouldn't be anywhere near as devastating as the one that shattered the plant in 1986, which resulted in thousands of deaths and spewed a radioactive cloud over Europe, Maxim Saveliev, a senior researcher with the Institute for Safety Problems of Nuclear Power Plants (ISPNPP) in Kyiv, Ukraine, told Science. If the nuclear material ignites again, the blast will be largely contained within the steel and concrete cage known as the Shelter, which officials built around the plant's ruined Unit Four reactor one year after the accident.

Still, even a contained explosion would make the long-term mission of removing the plant's FCMs much harder, Saveliev said. The Shelter is old and could easily crumble from the force of an explosion, filling the area with heavy debris and radioactive dust. (The Shelter itself is contained in a larger steel structure called the New Safe Confinement, which was completed in 2018.)

Neutron levels have been steadily rising in room 305/2 for four years, Saveliev said, and could continue rising for several more years without incident. It's possible these nuclear nuggets will fizzle out on their own in that time. But if neutron levels keep rising, scientists will have to intervene.

That is more easily said than done, of course; plant managers have yet to figure out how to access the tons of radioactive material buried below the room's thick layers of concrete debris. Radiation levels are too high for humans to endure, but radiation-resistant robots might be able to drill through the rubble and install neutron-absorbing control rods into the room, according to the ISPNPP.

Ukraine hopes to present a detailed plan for the removal of Chernobyl's still-smoldering FCMs by September, Science reported.