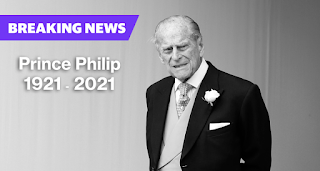 The Duke of Edinburgh has died aged 99, Buckingham Palace has announced.

The Palace said in a statement: “It is with deep sorrow that Her Majesty The Queen has announced the death of her beloved husband, His Royal Highness The Prince Philip, Duke of Edinburgh.

"His Royal Highness passed away peacefully this morning at Windsor Castle.”

The Palace said more announcements would be made and added: "The Royal Family join with people around the world in mourning his loss."

Tributes have poured in from around the world, led by Boris Johnson, the Prime Minister, who said he had "helped to steer the Royal Family and the monarchy so that it remains an institution indisputably vital to the balance and happiness of our national life".

He said: "He [Philip] was an environmentalist, and a champion of the natural world long before it was fashionable.

“With his Duke of Edinburgh awards scheme he shaped and inspired the lives of countless young people and at literally tens of thousands of events he fostered their hopes and encouraged their ambitions.

“We remember the duke for all of this and above all for his steadfast support for Her Majesty the Queen.

“Not just as her consort, by her side every day of her reign, but as her husband, her ‘strength and stay’, of more than 70 years.

“And it is to Her Majesty, and her family, that our nation’s thoughts must turn today.

“Because they have lost not just a much-loved and highly respected public figure, but a devoted husband and a proud and loving father, grandfather and, in recent years, great-grandfather.”

His fiancee Carrie Symonds tweeted: “So very sad to hear of the passing of HRH, the Duke of Edinburgh. An incredible life devoted to the Queen, his family and our country. Thoughts and prayers with Her Majesty and the Royal Family.”

“Prince Philip dedicated his life to our country – from a distinguished career in the Royal Navy during the Second World War to his decades of service as the Duke of Edinburgh.

“However, he will be remembered most of all for his extraordinary commitment and devotion to the Queen.

“For more than seven decades, he has been at her side. Their marriage has been a symbol of strength, stability and hope, even as the world around them changed – most recently during the pandemic. It was a partnership that inspired millions in Britain and beyond.

“My thoughts are with the Queen, the Royal Family and the British people as our nation comes together to mourn and remember the life of Prince Philip.”