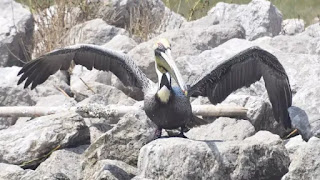 After being found completely covered in oil on June 14, 2010, the bird was taken from Louisiana to Georgia to avoid the ongoing spill, where it was later rehabilitated and released. Now, over a decade after its traumatic ordeal, the pelican has finally made the 700-mile (1,100 kilometers) journey back home.

"It's truly impressive that it made its way back from Georgia," Louisiana Department of Wildlife and Fisheries (LDWF) biologist Casey Wright, who spotted and photographed the pelican sitting atop a rock on Queen Bess Island in Barataria Bay, said in a statement.

The bird was identified by the tag that was clipped to its right leg after its rescue from Empire Jetty in Barataria Bay in the aftermath of the spill, which smothered the Gulf of Mexico with more than 400,000 tons (370,000 metric tons) of oil.

The spill began on April 20, 2010, and news reports flooded the world with images of marine animals slicked black with oil. Many died because they were unable to swim or fly due to the spill, or from toxic exposure to the hydrocarbons in the oil, which seeped into their bloodstream through their skin, eyes and orifices. Oil spilled from the pipe for 87 days, wreaking enormous environmental destruction across the coast; with lasting effects on the area to this day. 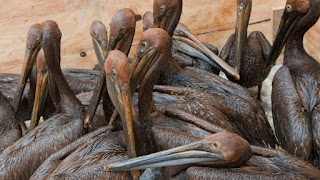