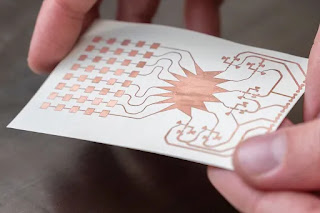 Harvesting abundant sources of renewable energy and then converting them

into something valuable has been the quest humankind has been on for decades. This makes even more sense in current times when we are on the brink of exhausting earth’s vital resources, causing unrepairable harm to the planet. As scouts of this very quest, the team at Georgia Tech’s ATHENA lab has created a 3D-printed energy harvesting antenna that’s capable of garnering electromagnetic energy of the 5G signals to juice modern-day gadgets. The technology is literally about putting the overcapacity 5G network bandwidth to judicious use – turning it into a wireless power grid that could shape the future of our relentless energy requirements for IoT devices or mobile devices.

They’ve created a flexible Rotman lens-based rectifying antenna (rectenna) that can collect the millimeter-wave in the 28-GHz band – the first of its kind. Previously there have been attempts to harvest the 24 or 35 GHz frequencies, but they were not practical since they only worked when they are in sight of the 5G base station. Emmanouil Tentzeris, Professor in Flexible Electronics in Georgia Tech’s School of Electrical and Computer Engineering, rightly summed it up by saying, “The fact is, 5G is going to be everywhere, especially in urban areas. You can replace millions, or tens of millions, of batteries of wireless sensors, especially for smart city and smart agricultural applications.”

This one is by far the most potent wireless power grid capable of powering devices at acute range – much better than any existing technology aimed at doing so. The credit card-sized iteration of the technology has a spiky plate around the center, which assimilates the 5G network’s millimeter waves. Just to compare, the rectenna design antenna developed by the team is almost 21 times more capable of sucking power from any direction – making it a viable bendable energy harvesting system capable of being employed in future technology implementations for the end-user.

It could be anything from an energy harvesting phone case, a credit card in your wallet that could charge your smartwatch at the end of the day, or a deck of cards that does more than its core intended purpose. For now, however, the innovation is only capable of powering low-energy IoT devices like sensors on your thermostat, but still, it the first step in the limitless possibilities that it promises.

Designer: Researchers at the Georgia Institute of Technology