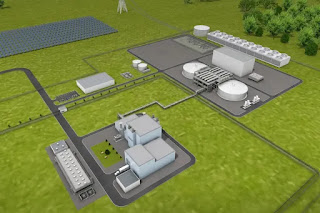 pillar of any plan to decarbonize the world's energy generation industries and eliminate fossil fuel use. But for many reasons – intermittency, location dependency, land requirements, and others – they can't do it alone.

To fully remove greenhouse gases from the world's energy sectors, there needs to be a cheap, scalable form of zero-emissions energy that can reliably produce power 24/7/365. All the better if it can rapidly ramp its output up and down to help the power grid cope with load spikes and interruptions in renewable energy supplies. The best candidate to fill this role right now is advanced nuclear power.

While nobody wants their back yard to become synonymous with Chernobyl or Fukushima, nuclear is demonstrably one of the safest forms of energy generation. Where coal and oil-derived energy cause 24.6 and 18.4 fatalities per terawatt of energy supplied, nuclear power has caused just 0.07 – and that includes the high-profile disasters that have led to its sullied reputation.

Considering the projected death toll of a 2°C temperature rise – somewhere between 300 million and 3 billion premature deaths spread over one to two centuries – the fourth generation of nuclear power is well and truly back on the table, and with many decades of development, advanced modeling and materials technology on its side, it's likely set to improve its already excellent safety record.

One promising initiative that has been backed by heavy private investment as well as the US Department of Energy is a collaboration between Bill Gates's Terrapower and GE Hitachi Nuclear Energy. Natrium (latin for sodium) is getting the chance to demonstrate its "cost-competitive, sodium fast reactor with a molten salt energy storage system" at proper commercial scale thanks in part to a US$80 million DoE grant announced in October. 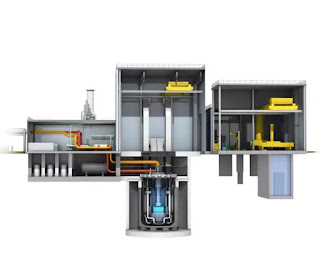 The sodium fast reactor is designed to run 24/7 at its maximum 345 MWe capacity
Natrium
Natrium's demonstration plant will be fully operational and connected to the power grid in its as-yet-unknown location by the mid to late 2020s. Its fast-neutron reactor will use high-temperature liquid sodium as its reactor coolant instead of water.

One of sodium's key advantages is the huge 785-degree temperature range between its solid and gaseous states; water offers only a 100-Kelvin range, so it needs to be pressurized in order to handle higher amounts of heat energy. High levels of pressure can have explosive consequences, and they also greatly increase the cost of the plant, as nuclear-grade high pressure components are not cheap.

Liquid sodium will transfer an impressive amount of heat away from the reactor at normal atmospheric pressures, with the added bonus that it won't dissociate into hydrogen and oxygen, so Fukushima-style hydrogen explosions are out of the question. It's also non-corrosive, sidestepping an issue that puts a question mark over molten salt reactors.

Like many of the next-generation nuclear reactors under development, the Natrium design will use High-Assay, Low Enriched Uranium (HALEU) as its nuclear fuel. Where natural uranium comes out of the ground containing around 0.7 percent of the U-235 isotope that's split to generate nuclear energy, and traditional Low Enriched Uranium (LEU) nuclear reactor fuel is enriched by centrifugal processes or gas diffusion to contain 3-5 percent U-235, HALEU is further enriched, between 5 and 20 percent. For comparison, nuclear weapons need uranium enriched to more than 90 percent.

HALEU fuel can be produced by reprocessing the spent fuel from traditional nuclear power plants, and its higher grade improves reactor performance and efficiency to the point where it allows advanced reactors to be much smaller than LEU plants. Natrium says it should be four times more fuel efficient than light water reactors.

In terms of safety, the control rods will drop by themselves due to gravity in the event of a power outage, and the natural circulation of the air will function as emergency cooling. Thanks to the liquid sodium design, the plant doesn't need a huge containment shield like light water reactors do, and the design puts the reactor underground, again boosting the safety factor while cutting down costs.

The Natrium plant is designed to run at 100 percent output, 24/7, outputting a constant 345 MWe in the form of heat. This heat is transferred out through the liquid sodium cooling system and transferred to a separate molten salt thermal energy storage system similar to what's been proven in many direct solar plants around the world. At the other end of this storage system is a set of steam turbines that can take that constant power and generate enough electricity to power somewhere around 225,000 homes. 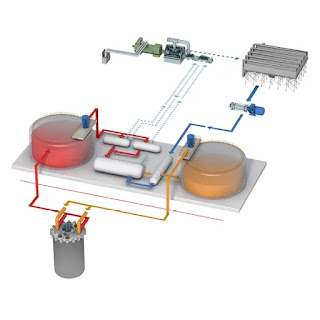 And here's where the Natrium design packs a massive extra punch; that storage system means the Natrium plant can react to demand spikes or intermittent renewable energy supply drops by harnessing that stored heat and ramping its turbines up to 150 percent of the nominal reactor power, pumping out 500 MWe for as much as 5.5 or more hours.

That represents nearly a gigawatt-hour of bonus on-demand energy storage; vastly more than even the largest grid-scale battery projects under development. This is an enormous advantage, particularly in the context of decarbonization, where load-reactive systems like this will play a critical role supporting renewable energy sources through the peaks and troughs in their less predictable generation cycles.

The DoE demo plant funding is obviously excellent news for Natrium, which now gets to develop and prove its capabilities before moving to roll similar plants out at scale, which will be significantly larger and more efficient to boot. It's also somewhat of a payback for Terrapower, which was preparing to build an experimental nuclear reactor outside Beijing to trial and demonstrate its separate Traveling Wave Generator technology when US Government sanctions on technology deals with China forced it to abandon the project in 2019.

If it all works out well, the Natrium design promises to be fast to build and commission, and to use far less nuclear-grade concrete than traditional designs – a huge factor in keeping the cost down and reducing the "green premium" on emissions-free energy. Will designs like these help put some shine back on nuclear power? Opportunities for these companies will be enormous as fossil fuels are scaled down. Time will tell.