An 'absolute plague' of mice is ravaging eastern Australia 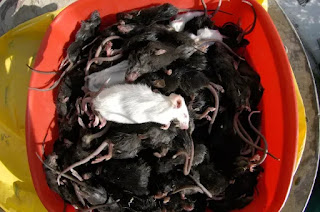 Mice in the cabinets. Mice in the streets. Thousands upon thousands of mice in the

barn, pooing so much it takes six hours to clean up their waste.

These are scenes from Queensland and New South Wales, Australia, where an out-of-control mouse infestation is making life miserable for farmers, grocers and other citizens of the eastern Australian states. One farmer interviewed by The Guardian described the rodent frenzy as "an absolute plague," more severe than anything locals have seen in decades.

Some farmers have already lost entire grain harvests to the rampaging mice, according to local media reports, while hotels have had to close because they can't keep the critters out of the rooms. Staff at a grocery store in a small town northwest of Sydney reported catching as many as 600 mice a night. So far, at least three people have visited the hospital with rodent bites, The Guardian reported.

Steve Henry, a researcher at CSIRO (Australia's national science agency) told The Guardian that the infestation is likely the result of an unusually large grain harvest, which drew more hungry mice to the area's farms earlier in the season than usual.

"They start breeding earlier and because there's lots of food and shelter in the system, they continue to breed from early spring right through into the autumn," Henry said.

Locals have responded by laying extra traps, while one farmer in nearby Queensland was just given permission to use a drone to drop poison bait on the mice from above.

Despite these efforts, Alan Brown, a farmer from the New South Wales city of Wagga Wagga, said that the plague was likely just beginning, considering the rapid pace of breeding in mice; a single breeding pair can produce a new litter every 20 days or so, birthing more than 500 offspring in a season, according to Reuters.

"A mature female can breed every three weeks, they can pump them out," Brown said. "And that's what is going on … it is building up to a massive plague."

In addition to being a nuisance and business threat, mouse plagues can also be vectors of disease, according to the Queensland Government's 1998 report on mice in Queensland.

"Perhaps the commonest [pathogens] are Salmonella bacteria that can be spread by a range of animal species (including humans)," the report said. "The bacteria are usually transmitted to people through food contaminated with infected urine or droppings, and can cause acute gastroenteritis."