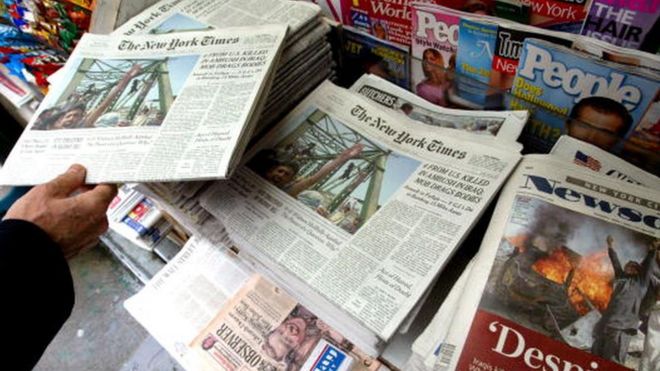 China has effectively expelled journalists from three US newspapers
in retaliation for restrictions on its news outlets in the US.

Its foreign ministry ordered reporters from the New York Times, the Washington Post and the Wall Street Journal to return media passes within 10 days.

The papers criticised the move, which will affect at least 13 reporters.

The Times said it was a mistake for China to cut itself off, while the WSJ called it an attack on press freedom.

"We unequivocally condemn any action by China to expel US reporters," said Washington Post executive editor Marty Baron. He said the decision was particularly regrettable because it came during the global crisis over the coronavirus.

At a press briefing in Beijing, the Chinese foreign ministry spokesman called the move a legitimate response to the restrictions placed on Chinese journalists in the US.

China's action is part of a swiftly escalating row between Beijing and Washington, and correspondents say the departure of the reporters will have a major impact on what the world knows about China as they do some of the most in-depth reporting about the country.

The measures were in response to "unwarranted restrictions on Chinese media agencies" in the US, the foreign ministry said.

It also demanded information about the papers' operations in China.

China's action also prohibits the newspapers' journalists from working in the semi-autonomous regions of Hong Kong and Macau, where there is greater press freedom than on the mainland.

Earlier this month, the Trump administration imposed limits on the number of Chinese citizens who could work as journalists in the US – the latest move in a tit-for-tat row over press freedoms.

“What the US has done is exclusively targeting Chinese media organisations, and hence driven by a Cold War mentality and ideological bias,” China’s foreign ministry said in a statement on Tuesday.

US Secretary of State Mike Pompeo urged Beijing to reconsider its decision, calling the move “unfortunate”.

“I regret China’s decision today to further foreclose the world’s ability to conduct the free press operations that, frankly, would be really good for the Chinese people in these incredibly challenging global times where more information, more transparency, are what will save lives,” Mr Pompeo said.

All foreign correspondents in China are required to renew their press credentials annually, which usually happens at the year end.

This means most American reporters of the three US major publications have an expiring visa and will need to leave China under the new rules. We don't know the exact number of affected journalists yet, but it's believed to be close to a dozen.

The expulsions will lead to a major personnel loss in these three media organisations' China operation, especially for the Wall Street Journal, which had already seen three reporters expelled from China last month.

Critics say it's an even greater loss for China, as the draconian measures come at a time when the country and the rest of the world need high-quality journalism on China more than ever.

It's still unclear whether the US publications can send new correspondents, American citizens or not, to fill in the positions in China.

In the midst of a dangerous pandemic, the world's two superpowers are locked in an escalating war with multiple fronts. By fighting over media, the origin of the coronavirus, and technology and trade, the US and China are competing to prove the superiority of their own political model.

At the beginning of March, the US state department said five media outlets, including China's official news agency Xinhua, would be required to reduce their total number of staff to 100 from 160.

The move was seen as retaliation for China's expulsion of two US journalists for the Wall Street Journal over a coronavirus editorial in February.

The row over media access is the latest episode in an increasingly acrimonious dispute between China and the US.

The coronavirus pandemic has been a source of tension too, with Washington and Beijing both accusing each other of spreading misinformation.

On Tuesday, US President Donald Trump angered China by referring to the coronavirus as “Chinese”.

A foreign ministry spokesman accused the US of stigmatising China, where the first cases of Covid-19 were recorded in the city of Wuhan in late 2019.

However, last week a Chinese foreign ministry spokesman shared an unfounded conspiracy theory, alleging the US Army had brought the virus to the region.

The unfounded accusation led Mr Pompeo to demand China stop spreading “disinformation” as it tried “to shift blame” for the outbreak.