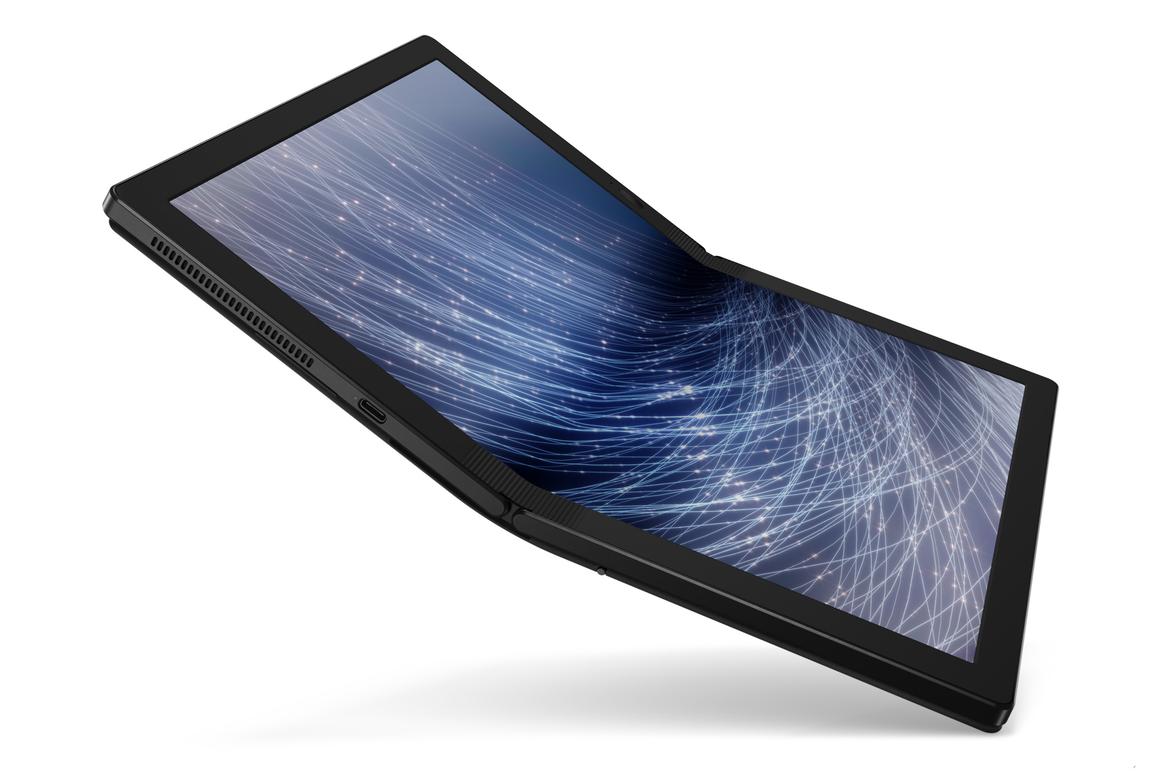 Lenovo calls the ThinkPad X1 Fold the "world's first foldable PC"
Samsung encountered a few problems with its Galaxy Fold smartphone, but Lenovo thinks it has ironed out any problems, albeit in a larger form factor. The ThinkPad X1 Fold unveiled at CES and set to go on sale this year looks almost identical to the prototype Lenovo teased last May and is designed to combine the power and usability of a laptop with the portability of a smartphone.

In all its spread-eagled glory, the device's 13.3-inch OLED touchscreen has a resolution of 2,048 x 1,536 at a ratio of 4:3 and can be used with the optional Bluetooth Mini Fold Keyboard. This keyboard can also be placed over the bottom half of the display, which can be angled up to result in a mini laptop form factor.
The physical keyboard can also be removed to reveal an onscreen virtual keyboard at the bottom of the display, or the unit can be unfolded and the physical keyboard used wirelessly. When the display is folded completely closed the keyboard fits in a gap in the middle, where it is held in place by magnets and charged wirelessly. The device also supports connection of a full-size keyboard and mouse and a second display can be connected via USB-C.
Since there isn't really much in the way of software to take advantage of a folding form factor, Lenovo has developed mode-switching software for Windows 10 to support the various configurations the X1 Fold is capable of. However, a future version is in the works that will run the upcoming Windows 10X, which Microsoft is developing for dual screen devices.
Lenovo says the X1 Fold has been in development for four years with LG Display, which provides the OLED screen, and led to the creation of a multi-link torque hinge mechanism built to withstand the stresses placed upon it while folding. The company hasn't scrimped on materials either, with a leather folio cover, lightweight alloys and carbon fiber all featuring in a device that tips the scales at 2.2 lb (999 g) including the cover.
The device was also co-engineered with Intel, which will supply Intel Core Processors with Intel Hybrid Technology, and will come with 8 GB of RAM and an SSD offering up to 1 TB of capacity. Lenovo is claiming up to 11 hours of battery life and 5G connectivity will be available as an option, as will the Mini Fold Keyboard and Active Pen. The Windows 10 version is scheduled for release mid-2020 with prices starting around US$2,500. A Windows 10X version will come some time afterwards, as will an easel-like stand.