Wikileaks founder, Julian Asange has been jailed for breaching his bail and hiding in the Ecuadorian Embassy 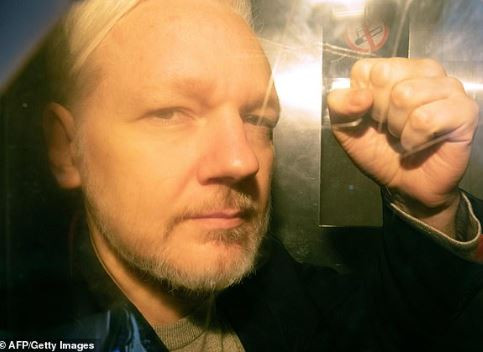 WikiLeaks founder Julian Assange was today sentenced to 50-weeks in jail for breaching his bail and hiding in the Ecuadorian Embassy.

Assange stood impassively with his hands clasped as the 50-week sentence was read out, while supporters in the public gallery chanted 'no justice in the UK' and 'shame on you' at the judge as police called for reinforcements over their radios.

Earlier, Assange 'apologised unreservedly' for jumping bail in a letter read out to the court, but his contrition did little to convince Judge Taylor, who gave him just shy of the maximum one-year sentence. The 47-year-old's lawyer had told Southwark Crown Court he was forced to act because he feared 'kidnap and torture' by the US.

Assange said in the letter read out to the court: 'I apologise unreservedly to those who consider that I have disrespected them by the way I pursued my case. I found myself struggling with difficult circumstances. 'I did what I thought at the time was the best or perhaps the only thing that I could have done. I regret the course that that has taken.'  Those difficulties, the letter continued, were 'compounded' and also 'impacted upon very many others'.

Assange was found guilty of breaching the Bail Act at a hearing at Westminster Magistrates' Court earlier this month after being arrested at the Ecuadorian Embassy. He was accused of sexual offences in Sweden in 2010, and after exhausting his legal options against an extradition order, went to the Ecuadorian Embassy on June 19, 2012. A warrant for his arrest was issued 10 days later.

In mitigation for Assange Mark Summers QC, told the court his client had been 'gripped' by fears of rendition to the US over the years because of his work with WikiLeaks.﻿
Posted by Tony Ogunlowo at Wednesday, May 01, 2019