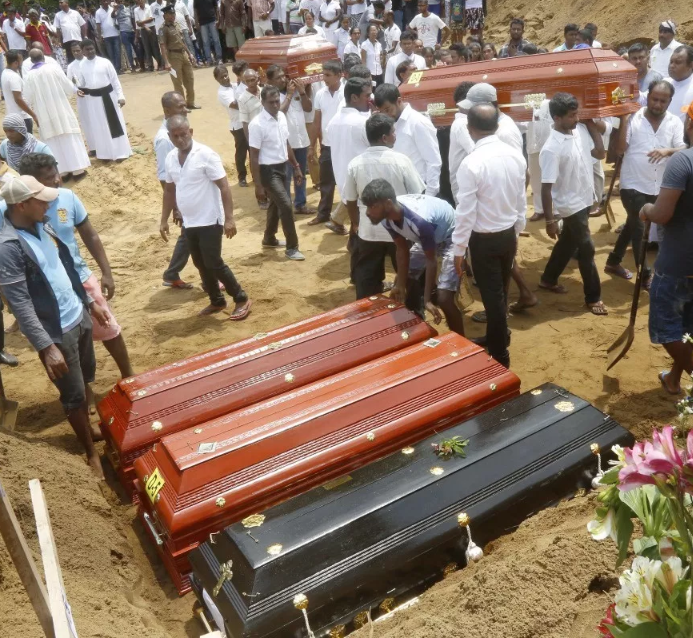 The Islamic State has claimed responsibility for the terror attack which took place in Sri Lanka on Easter Sunday.

ISIS claimed responsibility on Tuesday and said the multiple suicide bombings which killed at least 321 people and injured about 500, were carried out in retaliation for the Christchurch mosque shooting in New Zealand which killed 50 people last month.
The Islamic State's Amaq news agency referred to the suicide bombers who carried out the attack at churches and hotels in Sri Lanka as "Islamic State fighters"

A statement put out by the terrorist group's news agency Amaq stated: "The attackers who targeted citizens of the (anti-ISIS) coalition state members and Christians in Sri Lanka the day before yesterday were fighters of the Islamic State."
The terrorist group offered no evidence to support the claim, and there is no direct evidence yet that the terror group was involved.

Meanwhile, the archbishop of Colombo joined elected officials and others in chastising the government for not taking action after the government was alerted that terrorists planned to attack churches.
A full day of national mourning was declared across the country on Tuesday, as flags were lowered and a moment of silence was observed.
At 8:30 a.m., the time the first of six attacks were carried out on Sunday, Sri Lankans of differing faiths and ethnic groups bowed their heads and remained silent for three minutes.

Government officials said the number of people confirmed killed in the attacks was 321, up from 290 on Monday, The New York Times reports.
The first mass burials of the victims of the suicide attacks in Sri Lanka began on Tuesday, April 23. Coffins of adults and children were brought in for the funeral mass at St. Sebastian’s Church in Negombo.
St. Sebastian’s Church in Negombo was the hardest hit during the multiple terror attacks. As many as 100 people were killed there.
Soldiers and an armoured personnel carrier lined the roads as the burials took place. Priests wearing white robes trimmed with black sashes held funerals in a large tent just outside the church. The funerals are scheduled to go on all day.