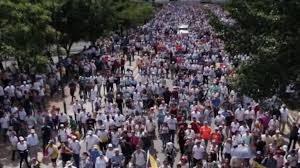 Speaking to supporters outside the Miraflores presidential palace in Caracas, socialist leader Mr Maduro said he would give US diplomatic personnel 72 hours to leave Venezuela, which is suffering from a hyperinflationary economic collapse.
However Mr Guaido has urged all foreign embassies in the country to disobey Mr Maduro's orders and not remove their diplomats.
Backed by hundreds of thousands of protesters and the support of the United States, Mr Guaido has declared himself interim president and called for free elections to end the rule of Mr Maduro.

In a statement minutes after Mr Guaido's declaration, US President Donald Trump recognised him as Venezuela's legitimate interim president.

"I will continue to use the full weight of United States economic and diplomatic power to press for the restoration of Venezuelan democracy," Mr Trump said in his statement.

That was swiftly followed by similar statements from Canada and a slew of right-leaning Latin American governments, including Venezuela's neighbours Brazil and Colombia.
US Secretary of State Mike Pompeo also released a statement rejecting Mr Maduro's attempt to break diplomatic ties.
"The United States maintains diplomatic relations with Venezuela and will conduct our relations with Venezuela through the government of interim President Guaido, who has invited our mission to remain in Venezuela," Mr Pompeo said.
"The United States does not recognise the Maduro regime as the government of Venezuela.
"Accordingly the United States does not consider former president Nicolas Maduro to have the legal authority to break diplomatic relations."

Authorities say seven people protesting against Mr Maduro's Government have been killed in a violent day of demonstrations across the country.
Opposition spokesman Freddy Superlano said four people were killed by gunfire in the south-western city of Barinas.
Mr Superlano said members of the National Guard and police were dispersing protesters at the end of an Opposition march when the gunfire erupted. He said another three people were injured.
A spokesperson for the Civil Protection office in the state of Tachira said the number of deaths in unrest in the city of San Cristobal had risen to three.
Mr Guaido, 35, has energised the Opposition with a campaign to declare Mr Maduro a usurper after elections last year widely regarded as fraudulent, and has promised a transition to a new government in a nation suffering a hyperinflationary economic collapse.

"I swear to assume all the powers of the presidency to secure an end to the usurpation," Mr Guaido said before an exuberant crowd.

A senior US official, speaking on condition of anonymity, warned Mr Maduro and his loyalists that Washington was ready to ramp up oil, gold and other sanctions.
The source said the US was ready to take unspecified actions "if they choose to harm any of the national assembly members or any of the other duly legitimate officials of the Government of Venezuela".
Asked whether he was considering US military intervention in Venezuela, Mr Trump told reporters: "We're not considering anything, but all options are on the table."
In a televised broadcast from the presidential palace, Mr Maduro accused the Opposition of seeking to stage a coup with the support of the United States, which he said was seeking to govern Venezuela from Washington.

"We've had enough interventionism, here we have dignity, damn it! Here is a people willing to defend this land," Mr Maduro said, flanked by top Socialist Party leaders.

The Defence Minister and members of the military high command were not pictured in the broadcast speech.
Mr Maduro started a second term on January 10 following a widely boycotted election last year that many foreign governments described as a sham.