There’s a new entrant in Volkswagen’s playful I.D. lineup of electric concept cars: the I.D. Buzz Cargo van. The transporter concept was presented at the IAA Commercial Vehicles conference in Hannover, Germany, as a progressive sibling of the I.D. Buzz, the all-electric, autonomous Microbus concept first unveiled at the 2017 Detroit Auto Show.

Made for businesses that haul products from place to place, the I.D. Buzz Cargo is an office on wheels. The light commercial vehicle has a solar roof, three front-row seats, and a third row that folds down into a workstation with an integrated laptop. The photovoltaic system generates so much energy that it is able to extend the range by up to 15 kilometres a day. So the longer the concept vehicle is in the sun, the farther it can drive later. And with Level 4 automation, you can theoretically get loads of work done while the van drives you to your destination. 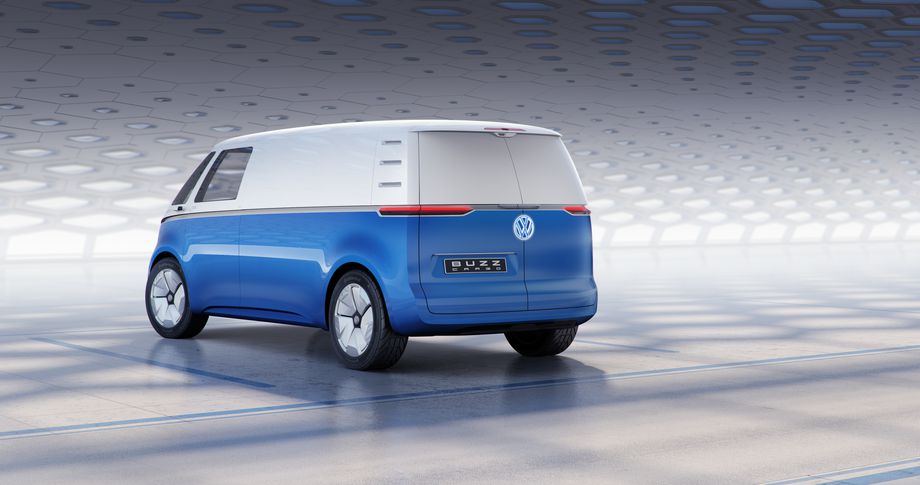 A collaboration between Volkswagen’s commercial and passenger vehicle divisions, the I.D. Buzz Cargo comes with a variety of battery sizes, depending on its purpose and budget. The battery pack provides a charge for about 200–340 miles, and a fast-charge option can get the vehicle up to 80 percent in 30 minutes. And while it’s just a concept, the VW I.D. Cargo was designed to be close to production level. The automaker aims to have the van ready for the European market by 2021 — a full year earlier than the I.D. Buzz.
Both concepts are meant to be clear homages to the iconic vehicle that the company sold in North America between 1950 and 1980. The production versions are expected to deviate little from the blunt-faced original. (All the batteries will be mounted under the floor.)
Both models are members of the I.D. Family, a new generation of fully connected, autonomous electric vehicles delivering the ranges of today’s gas-powered vehicles with a progressive design-DNA and impressive space. Other members of the I.D. family include the Vizzion, a 400-mile range, 75kWh-motor sedan, and the Crozz, a self-driving crossover SUV.