Tributes have been paid to Liz Fraser, best known for her roles in the Carry On films, after she died aged 88.

The London-born actress died on Thursday.
Fraser was famous for her role as a dizzy blonde alongside the likes of Kenneth Williams and Sid James in the classic British comedy series.
"Liz was one of the best character actresses you could ever wish to meet," said Morris Bright, chairman of Elstree Studios. 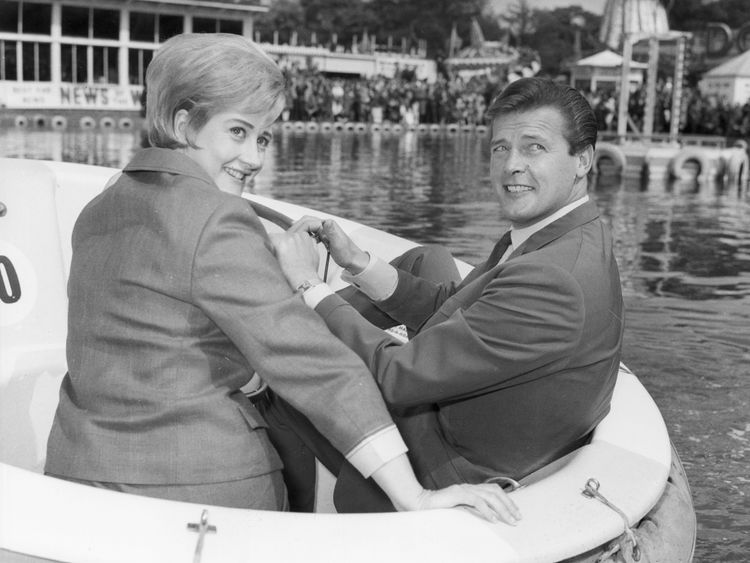 Image: Fraser with actor Roger Moore in May 1966

"She was another one of these people who was perhaps undervalued. But she worked with Peter Sellers and Tony Hancock. She gave as good as she got."
'Allo, 'Allo! actress Vicki Michelle tweeted: "So sad to hear of the loss of Liz Fraser, saw her regularly at events. Lovely actress, great speaker fab Lady Ratling.
"Loved her dog, he went everywhere with her. She worked with the greats #TonyHancock #TommyCooper Will be sadly missed @LadyRatlings #CarryOn #Lastofthesummerwine."
Fraser appeared in three of the early films from 1961 to 1963: Carry On Regardless, Carry On Cruising and Carry On Cabbing.
She was reportedly sacked by producers after criticising the way the series was marketed and did not return until 1975's Carry On Behind
She worked with comedy great Peter Sellers on The Smallest Show On Earth in 1957, and had her breakthrough playing his daughter in 1959's I'm All Right Jack.
Fraser also appeared in Hancock's Half Hour, and later in her career had parts in TV shows including Last of the Summer Wine, Minder and Holby City.
Fraser was married twice but did not have any children.
She was due to take part in a Carry On-themed cruise in the Mediterranean at the end of this month to mark the 60th anniversary of the series.