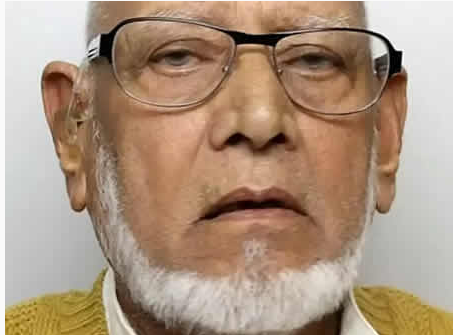 A man has been jailed for four-and-a-half years after admitting fathering his daughter’s three children.

Ashraf Khan was called a “wicked” man by the judge after his illicit children fought for justice for their mother, whose secret was only revealed when she spoke out on her deathbed.

According to Daily Independent, Khan, 81, was arrested after the woman’s husband, who had DNA tests to confirm the children’s parentage, reported the matter to West Yorkshire Police in 2012.Prosecutor Abigail Langford told the court the complainant was born in Pakistan in the 1960s, one of Khan’s six children.
She married her husband there in the early 1980s, before moving to Bradford, West Yorkshire, to join him and her father.She went on to give birth to three children in that decade before passing away.
Ms Langford said:

“It was on her deathbed she told her husband the defendant was in fact the father of her three children.”

The man did not report the matter to police straightaway, Ms Langford explained


: “He wished to continue to act as a father and care for the children he had brought up as his own.”

When the matters were reported to police in 2012, Khan was back in Pakistan and did not return to the UK until 2016.
When he was interviewed in September of that year, the court heard he “denied having any sexual relations with his daughter.”
Ms Langford said a medical report concerning the three children had found various ailments “directly attributed to their incestual parentage,” including an inability to feel certain kinds of pain, resulting in injuries such as burns during their childhoods.
In a joint victim impact statement, the children said Khan’s offending had caused psychological damage and had impacted on their physical health.
They also paid tribute to their mother’s “honourable” husband for his “fortitude and selflessness throughout the years.”
Khan, from Bradford, pleaded guilty to three counts of incest a month ahead of a proposed trial.
His barrister, Nigel Jamieson, said his client suffered from poor health, but accepted a prison sentence would not be unjust.﻿
Posted by Tony Ogunlowo at Friday, July 27, 2018