To the sound of horns, chanting and laughing, women were finally allowed inside football stadiums in Iran on Wednesday, fulfilling lifelong dreams of watching a game.

The last time women were able to attend a football match in Iran was in 1979, but on Wednesday female fans entered the Azadi stadium in Tehran to watch their team play Spain in the 2018 World Cup.
Following the match the Azadi stadium said "there will be no problem" for women hoping to watch a screening of Iran's upcoming match, against Portugal on Monday.
Selfies taken by women inside the grounds circulated on social media and the Iranian football team tweeted a photo of a young woman in the stands holding the national flag.
Five women had previously been inside the Azadi stadium, in May - but they were wearing beards and wigs to disguise themselves as men.
Although there is no official ban on women entering sports venues in the conservative country, the religious establishment has refused to relax restrictions and police usually prevent women attending.
Women have previously been punished for attending matches, including in March when 35 women were detained for trying to attend a football game.
After it was announced on Wednesday morning that women and families could watch the Iran-Spain match, women queued outside the Azadi stadium with their tickets. But they found that security forces were blocking the entrance claiming that the plan had been cancelled due to "infrastructure issues".

Fans started to chant in protest and some staged a sit-in, saying they would not leave until they were allowed in.
Videos of the protests circulated on social media and hashtag #Azadi_cancellation trended on Twitter, with nearly 2,000 posts in an hour.
After a special order by the Interior Minister Abdolreza Rahmani-Fazli, fans were let in an hour before kick-off.
Women shared their delight online at being allowed inside for the first time in their lives.
Reformist MP Tayyebeh Siavashi tweeted a photo of herself in the stands, writing that women and men should be allowed to be happy together.

The monumental moment didn't escape the attention of Spain's captain Sergio Ramos. Although his team won the match, he tweeted that the victory belonged to Iranian women.

In Russia, Iranian women who travelled to watch the game live also celebrated attending their first match.
Although women are expected to be able to attend further World Cup screenings next week, many believe it less likely that permission will be extended for the upcoming Iranian Premier League. 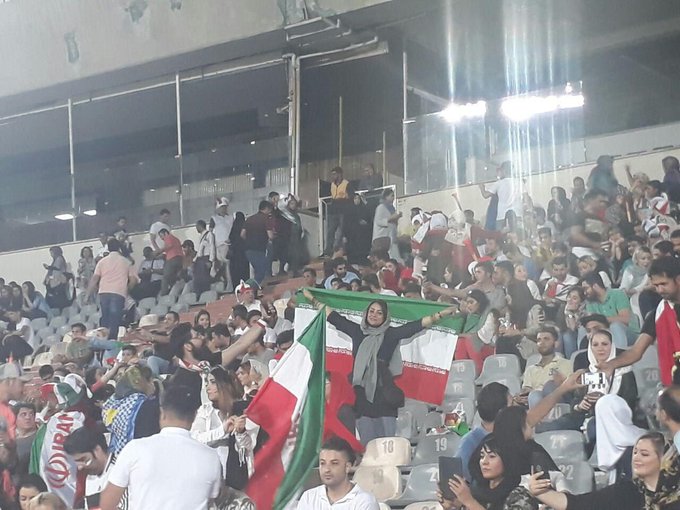