BIGGEST BITCOIN HEIST EVER? HOW TWO SOUTH AFRICAN BROTHERS VANISHED WITH $3.6BN WORTH OF BITCOINS! 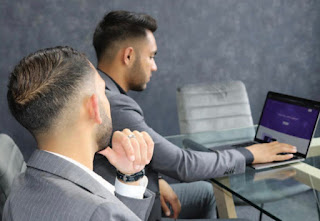 Two South African brothers have vanished with $3.6 billion worth of bitcoin in what could potentially be the biggest cryptocurrency heist in history. In 2019, Ameer Cajee and his younger brother, Raees Cajee, founded crypto investment app Africrypt.

Not long after, the siblings, along with 69,000 bitcoins worth roughly $4 billion at their April peak, disappear and are nowhere to be found.

Africrypt COO Ameer Cajee issued a letter to investors on 13 April stating the company, which he and his brother founded in 2019, had been forced to halt all operations after a “recent breach” in which clients’ wallets had been compromised.

“At this point, it is unknown to us the extent of personal client information breached during the attack,” wrote Cajee at the time, adding that clients would be updated on any progress made in recovering the “stolen funds and compromised information”.

In an unusual step, 20-year-old Ameer told them not to report the incident to authorities as this would impede attempts to recover the funds.

A few suspicious customers, however, did report the hack. They contacted Hanekom Attorneys who then tried to track the brothers down. When unsuccessful, Hawks, a police unit in South Africa that targets crime and corruption, was looped in.

“We were immediately suspicious as the announcement implored investors not to take legal action,” Hanekom Attorneys told Bloomberg over email. “Africrypt employees lost access to the back-end platforms seven days before the alleged hack.”

The lawyers also told cryptocurrency exchanges around the world to sound an alarm if they noticed any suspicious conversion of coins.

FNB, which banked Africrypt, has also been questioned about the episode. The local bank denied any involvement.

“FNB once again confirms that it does not have a banking relationship with Africrypt. Due to client confidentiality, FNB cannot provide any information on specific bank accounts,” Nadiah Maharaj, FNB risk spokesperson said.

As the brothers remain missing, some efforts to get to the bottom of things have hit roadblocks. For instance, South Africa’s Finance Sector Conduct Authority, the country’s financial institutions regulator, said cryptocurrency-related matters do not fall under its jurisdiction. Crimes involving crypto are a growing cause of concern for regulators and companies.

Most recently, the Bank for International Settlement criticised the digital asset for its role in illegal activities.

“By now, it is clear that cryptocurrencies are speculative assets rather than money, and in many cases are used to facilitate money laundering, ransomware attacks, and other financial crimes,” BIS said.

The investors in Africrypt are in limbo. They have to simply wait this out and hope the brothers would re-appear. In the meantime, the Gauteng South High Court has granted a provisional liquidation order against Africrypt directors Ameer, 17, and Raees Cajee, 20, in favour of a group of about 20 investors, and the two brothers have until 19 July to argue against the liquidation.

OneCoin is a Ponzi scheme promoted as a cryptocurrency by Bulgaria-based offshore companies OneCoin Ltd (registered in Dubai) and OneLife Network Ltd (registered in Belize), both founded by Ruja Ignatova in concert with Sebastian Greenwood. OneCoin is considered a Ponzi scheme due to its organisational structure and because of the previous involvement of many of those central to OneCoin in similar schemes. US prosecutors have alleged the scheme brought in approximately $4 billion worldwide. In China, law enforcement recovered 1.7 billion yuan (US$267.5 million) while prosecuting 98 people. Ruja Ignatova disappeared in 2017 near the time a secret US warrant was filed for her arrest and was replaced by her brother, Konstantin Ignatov. Most of the leaders have now disappeared or been arrested, though Ruja Ignatova has not. Greenwood was arrested in 2018, as was Konstantin Ignatov in March 2019. In November 2019, Konstantin Ignatov pleaded guilty to charges of money laundering and fraud.